To Be or Not to Be Sugar-Free: The Facts About Artificial Sweeteners

Originally created for people unable to consume regular sugars, alternative and artificial sweeteners have become extremely popular in Edmonds in all kinds of different products. From chewing gum to diet soda, Dr. Kitts wants you to know which of these options are best for your dental and general health, so here are the facts about a few of the most common sweeteners. 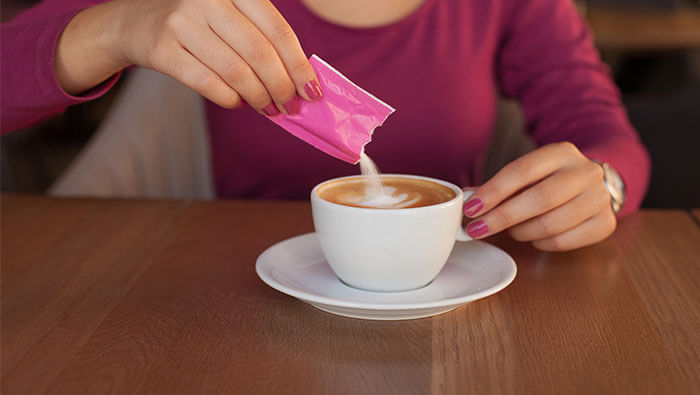 The benefits of artificial sweeteners were first recognized as a safe option for diabetics, but have since exploded in popularity because food, beverage, candy, and snack companies have discovered that it is easier to sell fewer calories. In addition, Edmonds residents with a sweet tooth know that artificial sweeteners are notorious for their ability to ruin your portion control. The substances listed below are considered sugar-free and inhibit tooth decay because bacteria cannot ferment them into enamel-destroying acids. Despite ongoing controversy about health concerns of sugar substitutes, the FDA considers the following substances to be safe for regular consumption:

Aspartame is a calorie-free artificial sweetener roughly 200 times sweeter than table sugar and is common in sodas, candy, and gum. It is the main ingredient in NutraSweet, Equal, and Sugar Twin brand sweetener packets. Although the FDA considers it to be safe, health advocates claim that it causes headaches and general malaise. University of Liverpool researchers also found that when combined with a common food coloring agent, aspartame can become toxic to brain cells. It is also linked to weight gain and appetite control problems.

Saccharin is the sugar-free stuff in the tiny pink Sweet’n’Low packets Edmonds residents have been seeing for years. This substance is the oldest artificial sweetener and is 200-700 times sweeter than sugar. It is non-caloric and can be found in a wide variety of different products. Although saccharin doesn’t have quite as bad a reputation as aspartame, the American Cancer Society found in one study that saccharin is linked to weight gain.

Sucralose (Splenda) is an artificial, non-caloric sweetener derived from sucrose (table sugar) in a patented process that replaces several hydroxyl molecules with chlorine atoms. Health concerns with sucralose are mainly related to the body’s inability to detoxify certain substances, specifically organochlorine compounds like sucralose. Health advocates claim that not enough long-term studies have been performed to determine its safety, but the FDA has approved it. Environmentalists worry that sucralose may subtly affect the Earth’s ecosystem because it is commonly found downstream from waste-treatment plants.

Stevia (Truvia) is classified as a novel sweetener (a sweetener made up of a combination of sweeteners) and is derived from the leaves of the stevia plant. Although it is new to western society, it has been used for hundreds of years by the Guarani Indians of Paraguay. It is non-caloric and poses no known health risks, although it is still undergoing testing by various international food safety agencies, the FDA has awarded it GRAS (generally regarded as safe) status. The largest complaint against stevia is its distinctive aftertaste. Stevia is up to 300 times sweeter than standard sugar, and as with all calorie-free sugar substitutes, it may cause weight gain because it does not provide the ‘full’ feeling we are used to from sugar.

Xylitol is a naturally occurring sugar alcohol or polyol, that is derived from vegetable fibers such as corn husks or tree bark. Sugar alcohols are common components in candy, gum, and chocolate and do not actually contain any alcohol. Xylitol is the only sweetener that has been proven to provide active resistance to dental caries (cavities). Consuming between 3 and 10g of xylitol (in chewing gum, lozenges, etc.) per day is an effective method of fighting tooth decay. However, Dr. Kitts wants every Edmonds resident to know that most gums at your local supermarket checkout counter do not contain enough xylitol to have any effect on cavity prevention. Specialty gums that do fight tooth decay are available in pharmacies, specialty stores, and online. Look for gums that list xylitol as the first or second ingredient. Also, be aware that xylitol gums – while very healthy for your teeth – can be deadly to dogs.

If you would like to discuss the healthiest way to sweeten your coffee or want to visit Soundview Family Dental for a consultation, please contact us!

The content on this blog is not intended to be a substitute for professional medical advice, diagnosis, or treatment. Always seek the advice of qualified health providers with questions you may have regarding medical conditions.

Born in Seattle and raised in Puyallup, Dr. Eric Kitts received his undergraduate degree from Washington State University and his DDS from the University of Washington School of Dentistry. Dr. Kitts began practicing dentistry in 2000, at his office in Richmond Beach. In 2011, Dr. Kitts built a brand-new, state-of-the-art dental facility located in the heart of downtown Edmonds.

Book with us today!

Are you unhappy with the appearance of your teeth and refuse to show the world your beautiful smile? Has discomfort at the dentist kept you from receiving dental work that will give you a reason to smile again?

At Soundview Family Dental in Edmonds, WA, we understand that not everyone likes the dentist. Our team of caring professionals works with you to ensure that you feel comfortable from the moment you walk through the door. Specializing in cosmetic and restorative dentistry, Dr. Kitts and his team work hard to preserve your natural teeth and give you back a smile you can be proud of.

Contact today to schedule an appointment and let our team deliver a beautiful, natural-looking smile you can be proud to show off.

Book Online
← The Most Important Film of the Year: Biofilm History of the Toothbrush →